This is a personal story about workplace bias.

“Keep the company mostly male” was never a goal. In fact, if anyone had said that kind of crap out loud – the whole team would have reacted with disgust. I’m pretty sure that we didn’t break any laws or even “best-practices.” We had the required nondiscrimination policies and we took our annual sexual harassment training seriously.

For all that, the numbers are unambiguous: The people we hired and retained for the technical team were almost all men. Since I had a major role in our recruiting, hiring, and workplace practices, I’ve got to own that.

Bias is harder to isolate and pin down than crimes like assault and harassment. Bias feels vague, which provides wiggle room for those of us who hold the power to make change, rather than excuses.

I’m writing this now because I wish that someone had pointed it out to me at the time.

The dangers of monoculture

I’m proud of my nine years at that company. By every metric that we used, I think that we did a really good job. We bootstrapped from four people to fourteen without taking any external investment. We made payroll every single month, launched three products, and did all sorts of cool stuff.

Still, I know that we could have done better – and I’m not just talking about the moral perspective here.

When recruiting, we tended to reach only within our existing network. We hired people that we already knew or had heard of rather than casting a wider net. That’s part of why we recapitulated the biases of our industry.

This also created an intellectual monoculture in which we were all pretty sure of our own superiority. For all that the team was broad-minded and incredibly creative – we were also stuck with a tiny slice of the intellectual landscape.

Year over year this siloing held us back. It made it all too easy to believe that we were the very best. From where I sit now, that comes across as immature. It’s the arrogance of a regional sports champion that has never gone to a national competition.

From the outside, I can see how provincial we were.

That attitude (plus always showing up with an all male team) certainly cost us customers over the years. The NY Times has a decent article on how all male sales teams are less competitive.

On the performance side, you don’t have to take my word for it. Read Why Diverse Teams Are Smarter from the Harvard Business Review. Look at the Mckinsey report on how more diverse leadership makes companies more profitable.

My very favorite study in this space says it right in the abstract:

Groups with out-group newcomers (i.e., diverse groups) reported less confidence in their performance and perceived their interactions as less effective, yet they performed better than groups with in-group newcomers (i.e., homogeneous groups). Moreover, performance gains were not due to newcomers bringing new ideas to the group discussion. Instead, the results demonstrate that the mere presence of socially distinct newcomers and the social concerns their presence stimulates among oldtimers motivates behavior that can convert affective pains into cognitive gains.

I know a man who is an influential leader at a well known organization. He scans the author lists of scientific papers before reading the abstracts. If he doesn’t recognize the names, he doesn’t bother to go further. He once told me why: “It saves time. If they were any good, I would already have heard of them.”

The few women who did choose to join the company tended to leave after a much shorter tenure than the men. That difference speaks to workplace culture. I have to own that too, since I was responsible for many of the team’s day to day practices.

With what I know now, I can see that I built a place where it was pretty easy for people like me to succeed. My guess is that the more different a person was from me in their work and life patterns, the harder they would find it to succeed in my organization.

That inattention sabotaged the few people who made it past the filters described above.

As above, there’s no malice required. I just wasn’t paying attention.

Stated baldly, it’s a pretty weak and inexperienced manager who can only manage people just like himself.

This isn’t all in the past.

Just this year, in 2018, I took flak from several long-term friends because my “political correctness” made it harder for us to organize a joint marketing opportunity.

It’s all too easy to make excuses. The reality is that the state of inclusion in our industry is an embarrassing and broken thing.

It is our job to fix it.

Stat News has published several articles lately that shine a spotlight on some of the most egregious behavior. One stark example is their coverage of the Party At Bio Not At Bio. In case you haven’t heard, sponsors paid to have their logos painted on nearly nude women who danced for the crowd’s amusement.

The sponsors, organizers, and attendees aren’t bad people – but they weren’t paying attention. Making sure that the environment was safe and inclusive didn’t make the list of priorities.

It takes work to overcome these systemic biases. Fortunately, there are resources available. This twitter list of 300 women in tech you should follow is up to 522 members. https://500womenscientists.org makes it laughable to use the excuse that there are no qualified women available for speaking engagements.

Broccoli in your teeth

It’s still hard to talk about this stuff. I hesitated a long time before writing this post, and still longer before hitting “publish.”

That hesitation is because it is awkward, uncomfortable and weird every single time that I take a customer or a business contact aside and privately point out that they’ve got an all-male team.

People get defensive, evasive, and occasionally even insulting and sanctimonious. They come back with “what about,” and even bring up examples from my own past where I didn’t live up to the ideals that I’m now pushing on them. 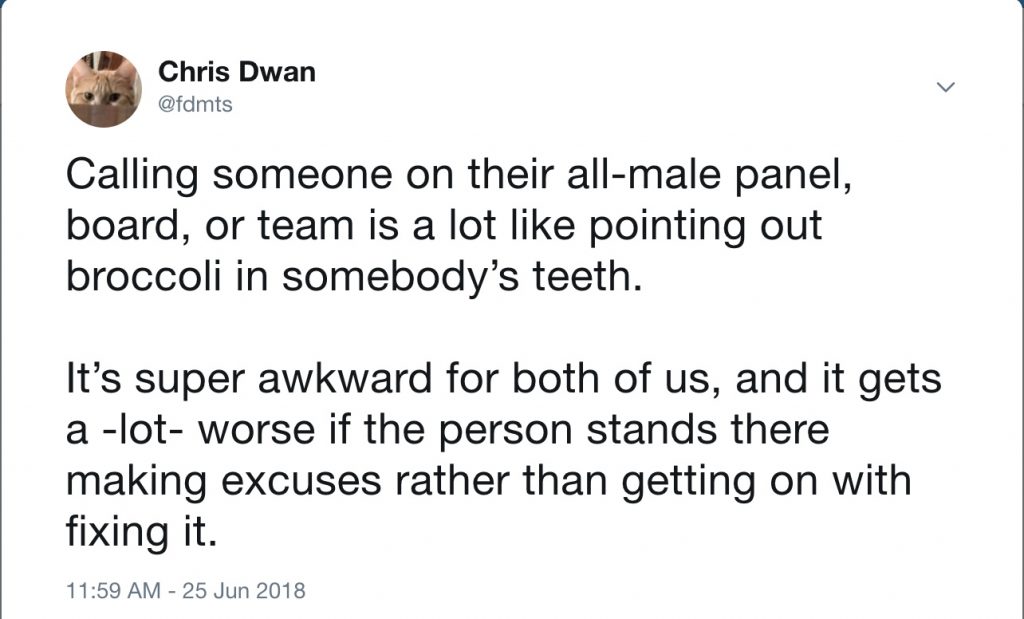 It’s important to power through that discomfort: A former colleague ran her group on the “must inform” principle. Whether it was broccoli in the teeth, a wardrobe malfunction, or something more significant – it was the team’s obligation to help each other.

The benefit was clear: Her team never showed up with junk in their teeth, or with easily correctible biases showing.

I wrote this because I wish that my mentors back in the day had said something to me.

Filed Under: Equity and inclusion
Be Humble
25 Rules For Sons

This site uses Akismet to reduce spam. Learn how your comment data is processed.